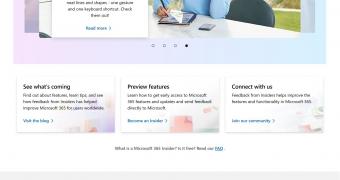 Microsoft is renaming the Office Insider program to Microsoft Insider as part of a transition that was started a long time ago.

Office 365 is already being referred to as Microsoft 365, so calling the testing program Office Insider didn’t make much sense in the first place.

Now the Redmond-based software giant is taking care of this, with the company trying to get rid of the Office Insider reference pretty much everywhere, including on the official website, on social media, and so on.

The company says the rebranding will take place slowly until March, so the whole thing is supposed to be over in approximately one month.

The rebranding process started on January 18

Needless to say, users don’t need to do anything, as the transition takes place on Microsoft’s side, with users who are enrolled in the Insider program to continue receiving updates normally.

“There is no impact to Office Insider updates. Apps in Current Channel (Preview) and Beta Cha… (read more)