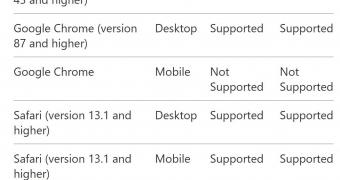 Microsoft has recently updated Skype for the web with support for Safari on both the desktop and mobile, so right now, the company says you can connect to the service regardless of the device you’re using.

On mobile, on the other hand, you can use Microsoft Edge version 43 and higher on Android or Safari version 13.1 and higher on iOS.

So right now, Skype on the web still doesn’t support Firefox on the desktop and Google Chrome mobile.

The latest Skype update, which brings it to version 8.71, comes with Meet Now improvements, as well as with a bunch of other refinements here and there.

“We’ve made it so you can name your Meet Now meetings when you create them, … (read more)
Remember to like our facebook and our twitter @WindowsMode for a chance to win a free Surface Pro tablet every month!