Someone Wants to Launch a Windows Phone with Android App Support 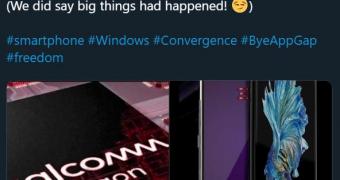 While Microsoft has killed off Windows Phone and Windows 10 Mobile and announced a Surface Duo dual-screen model running Android, a Windows phone per se still doesn’t exist, which means choosing a smartphone right now pretty much comes to picking either Android or iOS.

But a company called Emperion wants to change that with a new Windows phone that would also run Android apps, all without the need for an emulator or things like that. Or at least, that’s what the company promises.

Emperion teased the new phone on Twitter and only shared a few more details in a private discussion, explaining that the so-called Nebulus would come with Android app support at OS level. This means no other software or modifications would be required to run an Android app.

Microsoft helped make the W… (read more)
Remember to like our facebook and our twitter @WindowsMode for a chance to win a free Surface Pro tablet every month!