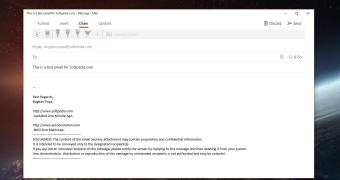 Microsoft has released an update for the Windows 10 Mail and Calendar app that brings Windows Ink support to all users.

Starting with version 11605.10325.20106.0, which is now gradually released to users worldwide, Windows 10 Mail app lets you write emails with touch or a stylus, like the Surface Pen. This also means that you can draw in emails, which is a very useful feature especially in office environments where employees want to share presentations or include notes in an email.

The new feature is available under the Draw option in a New Mail screen, and it should technically exist on all devices where a touchscreen is available.

It was previously released to insiders exclusively, but according to recent reports, it’s now in the process of being pushed to production devices as well.

Technically, this is a neat feature that comes… (read more)