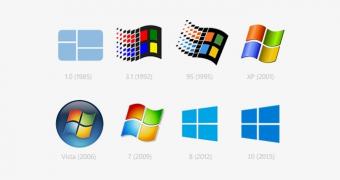 With Windows 7 support already pulled, Microsoft is nearly all about Windows 10 right now (despite Windows 8.1 still receiving updates until 2023).

And while the company is now recommending everyone to move to Windows 10, it goes without saying that this latest version of the operating system isn’t everyone’s cup of tea, and many just want to stick with an older release.

A GIF that was shared this week on reddit shows how the adoption of every Windows version increased and decreased in the last 17 years, highlighting the transition that so many users make from one Windows release to another.

Back in 2003, Windows XP was obviously the number one Windows version – as a matter of fact, Windows XP is still being used these days, despite no longer receiving support since April 2014; launched in 2001, Windows XP mostly runs on devices operated by enterprises or g… (read more)
Remember to like our facebook and our twitter @WindowsMode for a chance to win a free Surface Pro tablet every month!