The Three New Features in the Latest Windows 11 Preview Build 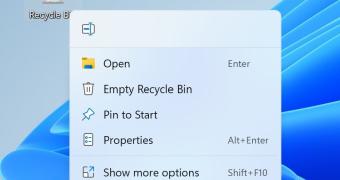 Microsoft has recently released a new Windows 11 build, and this time, there are three important changes that are included in the new feature category.

However, given Windows 11 is just around the corner, we obviously shouldn’t expect any massive improvements, especially as Microsoft needs to make sure everything is running as smoothly as possible.

So the first new feature included in Windows 10 build 22454 is the revamped context menu that now shows up for the Recycle Bin on the desktop.

As everybody knows already, Windows 11 comes with a visual facelift, as the operating system brings the Fluent Design language, including the acrylic effect, to more UI parts, while also switching to rounded corners for a more modern approach.

And with this new release, Microsoft is bringing the same treatment to the Recycle Bin context menu too.

The second new feature is an option that shows up when you right-click a network share in File Explorer. Thanks to this addition, use… (read more)
Remember to like our facebook and our twitter @WindowsMode for a chance to win a free Surface Pro tablet every month!