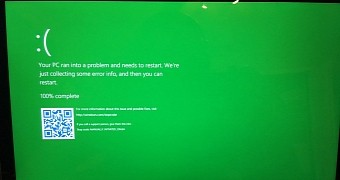 ​Everyone knows the infamous Blue Screen of Death, often referred to as BSOD, but more recently, some people have seen what it appears to be a new version of this super-frustrating error message.

The Green Screen of Death, now called GSOD, made its debut with the recently-leaked Windows 10 build 14997 and is actually an official thing, as Microsoft itself introduced it in the operating system with one important goal: to help the company distinguish production builds from insider versions.

Microsoft senior program manager for Windows Enterprise Development Platform Matthijs Hoekstra teased this change on Twitter on December 28, hinting that there’s something new in Windows 10 build 14997 that nobody reported until that point.

“Cool to read all the new features people discover in the leaked builds, but they missed a big change!, Huge change!. curious when its found,” he tweeted.

There were all kinds of answers, starting with Xbox and ending with Project Astoria, bu… (read more)