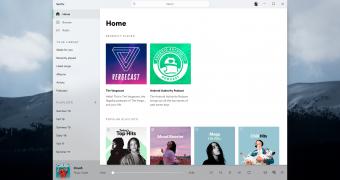 Microsoft’s Fluent Design language has already brought a highly-anticipated visual overhaul to Windows 10, but this doesn’t necessarily mean that users don’t expect the company to go even further with its OS facelift.

And as a matter of fact, the Fluent Design rollout continues in Windows 10 (and in other products too), with Microsoft gradually redesigning certain parts or apps for the OS.

In the meantime, designers in the Windows community are working on their own concepts which help envision how certain redesigns would look like once the Fluent Design makeover is complete.

What we have here is a concept that imagines a Windows 10-optimized version of Spotify, and of course, Fluent Design is an essential part of the design.

In fact, the Fluent Design language looks so good in this concept that makes the Spotify overall look like a macOS app. Not that it’s a bad thing, as the Mac has often been praised for its eye-candy looks.

The Fluent Design push</str… (read more)
Remember to like our facebook and our twitter @WindowsMode for a chance to win a free Surface Pro tablet every month!