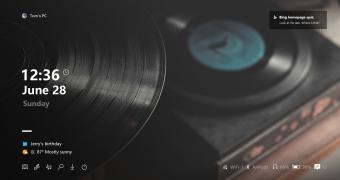 The Windows 10 lock screen and the sign-in screens are the first things users see when starting their computers, so for many, it’s pretty important for both of them not only to look and feel modern but also to provide as much information as possible.

And while Microsoft itself has further polished the lock screen with new Windows 10 feature updates, the company still doesn’t provide the customization package that users expect from the world’s number one desktop operating system.

A concept shared on Twitter earlier today by designer vGLAD imagines a refreshed version of the lock screen which apparently aligns with what users might want to get in Windows 10 in the first place.

Don’t hold your breath for a lock screen refresh

The amount of information displayed on the lock screen, for instance, has been significantly improved, all while also offering a design that comes in line with the visual refresh that Microsoft itself has implemented in Windows… (read more)
Remember to like our facebook and our twitter @WindowsMode for a chance to win a free Surface Pro tablet every month!