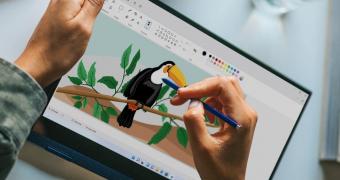 Microsoft is working on all kinds of new things for Windows 11, and as it turns out, one of the apps getting a modern redesign in this new operating system is the Paint app.

At one point supposed to be replaced by the new Paint 3D, the classic Microsoft Paint app is still there in Windows, and unsurprisingly, it’s still making the cut for Windows 11 as well.

Reddit user dieguesmosken has recently discovered marketing materials published by the official Windows account on Unsplash and which also include an early photo of what appears to be a new modern version of MS Paint that could be part of Windows 11.

As you can see in the screenshot, everything appears to be a lot more polished, therefore aligning the UI of Microsoft Paint with the one of the rest of the operating system as well. Furthermore, pen input is apparently supported as well, which makes … (read more)
Remember to like our facebook and our twitter @WindowsMode for a chance to win a free Surface Pro tablet every month!