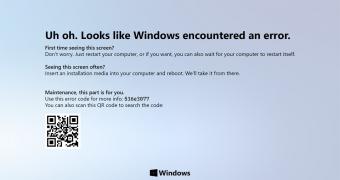 The infamous Blue Screen of Death, also known as BSOD, has been around for so many years, and just like the rest of Windows features, it also received several revisions throughout multiple generations.

But while the BSOD itself has evolved, it doesn’t necessarily mean it also got friendlier, as it’s mostly supposed to help power users diagnose issues and find a way to resolve them.

Someone on reddit, however, proposes a completely new approach for the BSOD which includes not only a fresh design, but also a message that’s a lot easier to understand, even for beginners.

The design itself uses elements that Windows 10 adopters are already familiar with, including the acrylic effect bundled with Fluent Design. And of course, there’s also a dark theme that would allow the BSOD to align with the rest of the operating system, which also features light and dark m… (read more)
Remember to like our facebook and our twitter @WindowsMode for a chance to win a free Surface Pro tablet every month!