This Windows 11 Task Manager Concept Makes Sense, Could Use Some Refinements 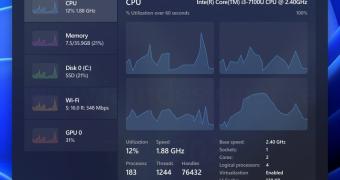 One of the features not getting as much love as others in Windows 11 is the Task Manager, which in the new operating system is mostly the same as in Windows 10.

So with Windows 11 evolving substantially and getting a new look, one would expect the Task Manager to also be redesigned in such a way that it would align with the rest of the operating system.

While Windows 11 is still in the development stage, so the Task Manager could still be facelifted by the time the OS hits the shelves, reddit user evilbulk has come up with their very own approach that reimagines this important feature that power users turn to on a regular basis.

In this concept, the Task Manager uses a modern UI that is indeed inspired by Windows 11, though as someone else on reddit says, the first screen barely makes any sense.