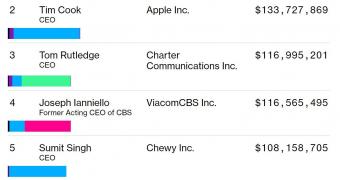 Being a CEO of a tech giant certainly isn’t an easy job, but when getting the paycheck, the whole thing is suddenly something that’s worth the effort.

And Apple CEO Tim Cook can confirm this is the case, as he’s now the highest paid CEO in the tech industry with over $133 million made last year.

This means Cook is second overall, after Tesla’s CEO Elon Musk who made no less than $595 million in 2019.

As far as Apple’s CEO competitors from the tech industry are concerned, the closest in the new charts published by Bloomberg is Intel CEO Robert Swan with $99 million last year, followed by Alphabet’s Sundai Pichai with over $86 million.

Satya Nadella, the CEO of Microsoft, holds the 9th position overall with $77 million in 2019.

Apple is currently the most valuable company in the entire world, so it makes sense for Tim Cook to also do well. According to these numbers, over $122 million of all … (read more)
Remember to like our facebook and our twitter @WindowsMode for a chance to win a free Surface Pro tablet every month!