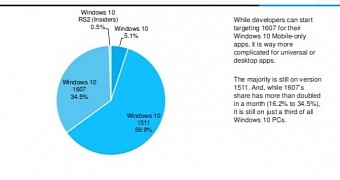 Microsoft rolled out Windows 10 Anniversary Update to PCs on August 2 and to mobile devices shortly after that, and it turns out that the majority of users rushed to install both of them on their devices, with statistics showing excellent early adoption for the new version.

AdDuplex data shows that the majority of Windows 10 Mobile users are already running version 1607, even though it was only recently launched, and a small share of consumers are testing Windows 10 Redstone 2 builds as part of the Insider program.

“Things are way more active inside the Windows 10 Mobile space. Close to 90 percent of the users are alr… (read more)