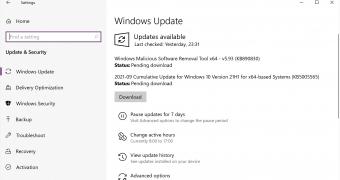 Microsoft has shipped new cumulative updates to Windows 10 devices as part of its regular Patch Tuesday cycle, and needless to say, the latest versions of the operating system are among those getting new updates as well.

Windows 10 version 2004, 20H2, and 21H1 are provided with the same cumulative update because they share a similar code base, so the improvements they’re getting are pretty much the same.

The update available for download on devices running these Windows 10 versions is KB5005565, and it’s mostly aimed at fixing the PowerShell security bug that has been exposing computers powered by Microsoft’s operating system.

The company explains that this update “addresses an issue that causes PowerShell to create an infinite number of child directories. This issue occurs when you use the PowerShell Move-Item command to move a directory to one of its children. As a result, the volume fills up and the system stops responding.”

Known issues in this update… (read more)
Remember to like our facebook and our twitter @WindowsMode for a chance to win a free Surface Pro tablet every month!