Why Notepad for Windows 10 Should Become a Modern App 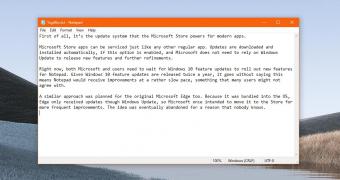 Believe it or not, but Notepad continues to be one of the most popular Windows apps, even if there are so many alternatives with substantially more advanced capabilities.

But Notepad is here to stay, there’s no doubt about it, and a confirmation of how much Windows users love Notepad came from none other than Microsoft, who in the latest OS feature updates implemented several new features for the app.

Back in August, Microsoft announced an idea that was received with mixed reactions by users out there: Notepad would be moved to the Microsoft Store in future releases. The company explained the following:

“Notepad has been a well-loved text editor in Windows for over 30 years. Over the last few releases, we’ve been making a number of small improvements to Notepad based on your feedback (including expanded line ending support, wrap around search, and indicating when there’s unsaved content.) Starting with this build, we’re making a change so that future Notepad updat… (read more)
Remember to like our facebook and our twitter @WindowsMode for a chance to win a free Surface Pro tablet every month!