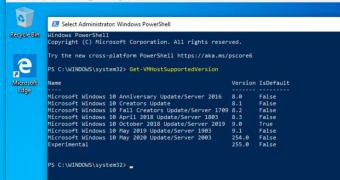 Microsoft is now giving the finishing touches to the update that the company refers to as Windows 10 19H2, but so far, this particular release has generated very limited excitement in the Windows community.

And this is mostly because 19H2 is unlikely to bring any major changes, but only under-the-hood tuning and improvements to the Windows Update system, with new features not exactly a priority.

This makes Windows 10 20H1, which is the update that Microsoft plans to release in the spring of 2020, the more anticipated release, especially given all the new features that the software giant has previewed in early builds shipped to users in the Windows Insider program.

Up to this point, however, whenever Microsoft talked about the next-spring update, it called it “Windows 10 20H1,” with no hint as to how it might be baptized at launch.

Hello, Windows 10 May 2020 Update
But as it turns out, Microsoft isn’t planning any big changes on this front, as a … (read more)