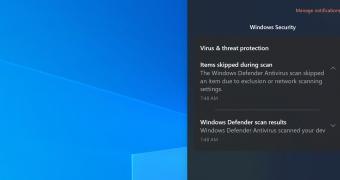 Recent antivirus tests have shown that Windows Defender, which comes pre-loaded on Windows 10, is now offering performance that’s on par with the one of third-party software from the world’s leading security vendors.

But a recently discovered bug in Windows Defender ruins this nearly flawless experience with the Windows 10 antivirus, as it causes the application to ignore some files during scans.

Reported by BornCity, the issue apparently showed up after the March 2020 Patch Tuesday when Microsoft released security updates for Windows and other products. Users claim that Windows Defender skips certain files during quick and full scans, as if they configured exclusions on their devices. Needless to say, these users did not set up any file exclusions and Windows Defender just skips scanning the files without being told to.

By the looks of things, users who encounter thi… (read more)
Remember to like our facebook and our twitter @WindowsMode for a chance to win a free Surface Pro tablet every month!