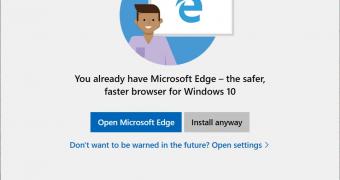 Microsoft has implemented what the company itself calls warnings in Windows 10 to issue notifications whenever users attempt to install Google Chrome or Mozilla Firefox.

This is just an experiment for the time being and it won’t be included in the Windows 10 October 2018 Update rolling out next month. However, it may be implemented in the OS at some point in the future.

The purpose of this rather controversial idea is to convince users to stick with Microsoft Edge, the new default browser in Windows 10 that replaces Internet Explorer.

The warning can be blocked from the Settings app, and a link to this option is included right within the notification to make it a bit more seamless for users who don’t agree with this behavior.