Windows 10 in Trouble as Gamers Move Back to Windows 7 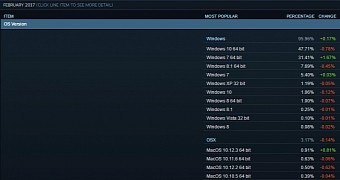 While overall adoption of Windows 10 slowed down worldwide, Microsoft’s latest operating system is losing ground on Steam, where users appear to be moving back to Windows 7.

Valve data for the month of February shows that Windows 10 declined on Steam, while Windows 7 was the only version that actually increased its share last month.

Specifically, Windows 10 64-bit dropped 0.78 percent to 47.71 percent, while the 32-bit version declined 0.12 percent to 1.06 percent. All the other Windows operating system lost users the past month, with one exception: Windows 7.

According to Valve, the 64-bit version of Windows 7 posted a substantial increase of 1.67 percent in February to return to 31.41 percent share, while the 32-bit version also experienced a growth, this time smaller of just 0.03 percent, to achieve 5.40 percent.