Windows 10 May 2019 Update Now Available for Download on MSDN 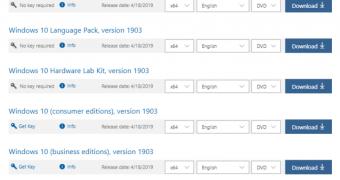 Several versions of the May update are thus available for download, including consumer and business editions, as well as a series of other add-ons like the Windows 10 Enterprise Windows Driver Kit, and the Windows 10 Hardware Lab Kit.

Microsoft hasn’t yet announced an official launch date for the May 2019 Update, but the company did say that its update is projected to land for consumers at the end of May.

Windows 10 version 1903 has already reached RTM, and the final build is currently part of the Release Preview ring of the Windows Insider program.

Microsoft says the update will stay in this ring for approximately one month before it receives the green light for the public rollout. In the meantime, the software giant will publish several cumulative updates that will help refine the performance and address the latest… (read more)