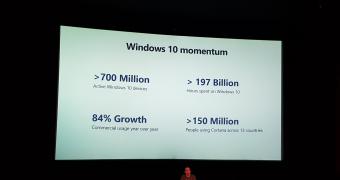 Microsoft originally planned to bring Windows 10 on 1 billion devices by the end of FY 2018, and while that plan failed, with the company itself saying that it needs more time to achieve this goal, adoption of the OS still improves at a moderate pace.

Most recently, the software giant confirmed at the Insider Dev Tour in London that Windows 10 was running on 700 million active devices.

Previously, Windows boss Terry Myerson said earlier this year that Windows 10 was only approaching this figure, but as it turns out, it needed just two months for the operating system to reach this important milestone.

At the same event, Microsoft revealed that overall, users spent no less than 197 billion hours on Windows 10, adding that more than 150 million people use Cortana across 13 countries. Finally, Windows 10 recorded 84% growth of commercial usage year over year.

While Windows 10 is improving, Windows 7 continues to be … (read more)