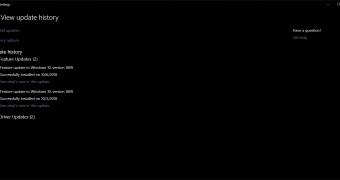 As it turns out, the new OS version that offered to the same PCs several times, despite some of them actually installing it successfully.

In other words, some users were prompted to install the October 2018 Update, even though earlier the same day, they did the same thing.

While this is quite an awkward bug that nobody expected to see in a final Windows 10 feature update, it’s worth mentioning that installing the October 2018 Update the second time, with a system reboot and everything, didn’t change files on the affected systems.

A discussion thread on <a href="https://www.reddit.com/r/Windows10/comments/9luyfi/why_windows_downloading_1809_update_but_i_upda… (read more)