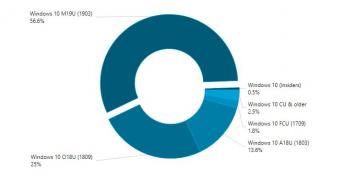 We’re only a couple of weeks or so away from the debut of a new Windows 10 feature update, and new statistics show that the latest stable release reached another important milestone this month.

New update just around the corner

Windows 10 version 1809, however, is currently the second release in the charts with 25% share, but AdDuplex says the majority of upgrades to version 1903 come from devices previously running the April 2018 Update.