Windows 10 Version 2004 Blocked on Media Creation Tool for Some 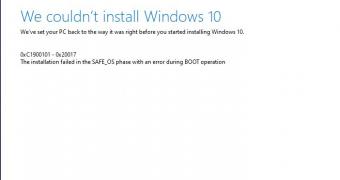 Some users are now complaining that Windows 10 version 2004 can’t be installed with the Media Creation Tool, and all they get is a weird error that doesn’t say too much about what’s going on.

Windows 10 version 2004 was released a couple of months ago, and Microsoft used a gradual rollout approach in order to make sure that it discovers major bugs as fast as possible.

However, the company offered several download methods for eligible devices, including not only version 2004 released on Windows Update but also the Media Creation Tool, an app that comes with a series of extras, including setting up bootable media for other devices.

Nevertheless, a bunch of users claim that installing Windows 10 version 2004 with the Media Creation Tool no longer works, and the process fails with the following rather unusual error:

We couldn’t install Windows 10.
W… (read more)
Remember to like our facebook and our twitter @WindowsMode for a chance to win a free Surface Pro tablet every month!