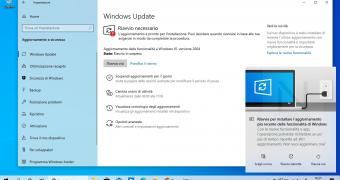 Windows 10 version 2004 is presumably just around the corner, as Microsoft is expected to sign off the RTM build any day now, but here’s a last-minute change that the company itself didn’t announce.

The next Windows 10 feature update will come with a new Windows Update notification that shows up when a new update is pending installation.

As per HTNovo, the notification also moves to the Action Center if the user doesn’t interact with it, and it offers a series of additional options, such as restarting the computer right now, rebooting it during the night, or picking an hour for the whole thing.

Furthermore, the notification also includes a visual advice to plug in the device so that it doesn’t run out of battery when installing updates, something that could break down the operating system and prevent the computer from booting.