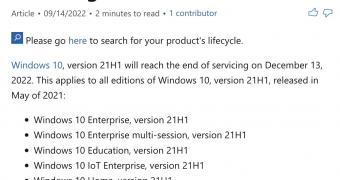 Microsoft is getting ready to retire another Windows 10 version, with the company now warning that version 21H1 would go dark in December this year.

Needless to say, with Windows 11 now getting all the love, Microsoft is only shipping small improvements for Windows 10. A new feature update for the operating system is expected later this year, but of course, the improvements that users are going to get will only be minor.

The demise of Windows 10 version 21H1 will happen on December 13, as per Neowin. After this date, the operating system will no longer get other operating system updates, so users running it will have no other option than to update to a newer version.

The involved security risks are more than obvious, as any vulnerabilities discovered in the operating system will no longer be patched.

The following versions of Windows 10 21h1 will be discontinued o… (read more)
Remember to like our facebook and our twitter @WindowsMode for a chance to win a free Surface Pro tablet every month!