Windows 10’s Feedback Hub Is a Flop, Here’s How Microsoft Can Save It 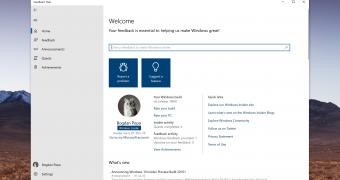 Back in October 2014 when it launched the Windows Insider program, Microsoft promised the future of Windows would be entirely decided by users, who were invited to participate in the development of the operating system by testing preview builds, sending feedback, and sharing their suggestions.

To streamline the relationship between the company and users, Microsoft launched the Insider Hub for Windows Insiders, an app whose purpose was to allow testers to send feedback in a more effective manner.

The app eventually became the Feedback Hub in May 2016, just ahead of the debut of the Windows 10 Anniversary Update, with Microsoft also opening it to everyone.

Beginning with this change, pretty much anyone running Windows 10 can send feedback to the company using the Feedback Hub.

Needless to say, Microsoft has insisted for Windows 10 users to always turn to the Feedback Hub whenever they had a new idea for the operating system or they came across something they believ… (read more)
Remember to like our facebook and our twitter @WindowsMode for a chance to win a free Surface Pro tablet every month!