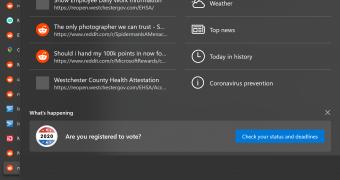 If you’re a long-time Windows 10 user, you probably know that the Windows Search isn’t necessarily the best thing that has ever happened to Microsoft’s operating system.

And if you still needed some more recent examples, just think of the blunder that occurred earlier this week and which broke down the search feature completely due to a web issue. In addition, Windows Search has started to show odd web suggestions lately totally out of the blue.

And now, it’s doing something similar, as Windows Search has started recommending people to go vote for president.

“Are you registered to vote? Check your status and deadlines,” a message that shows up in the search UI reads.

Powered by a server-side switch

That shouldn’t be a problem for most users since voting is quite important anyway, but the awkward thing is that the message shows up even on computers that aren’t located in the United States.

A discussion thread on <a href="https://www.reddit.com/r… (read more)
Remember to like our facebook and our twitter @WindowsMode for a chance to win a free Surface Pro tablet every month!