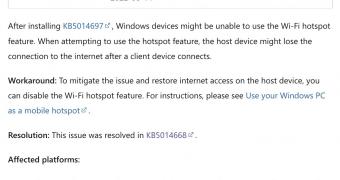 Microsoft’s most recent Windows 11 cumulative update, which is available right now for seekers, comes with an important fix that resolves the bug causing some devices to be unable to connect to the Internet with a Wi-Fi hotspot.

The company originally acknowledged the issue earlier this month, explaining that it was caused by another cumulative update, this time KB5014697.

“After installing KB5014697, Windows devices might be unable to use the Wi-Fi hotspot feature. When attempting to use the hotspot feature, the host device might lose the connection to the internet after a client device connects,” Microsoft said at that point.

It goes without saying this was a major glitch, but fortunately, Microsoft also provided a workaround to deal with the whole thing until a full fix was ready.

Microsoft said the only way to restore the Internet access to an impacted dev… (read more)
Remember to like our facebook and our twitter @WindowsMode for a chance to win a free Surface Pro tablet every month!