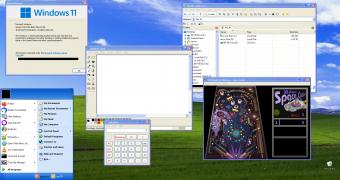 Microsoft is working non-stop on polishing the look of Windows 11, so the operating system comes with major improvements versus its predecessor, including a full focus on Fluent and Mica.

However, it’s not a surprise that not everybody is a big fan of the way Windows 11 looks, particularly because the operating system is more or less losing its familiarity factor.

For example, the desktop sports a completely new approach, with the Start menu and the taskbar icons now centered and no longer aligned to the left of the screen as it was the case in all the other Windows versions.

The Start menu has also adopted a static approach, with live tiles completely dropped and Microsoft using a design inspired by Windows 10X.

However, someone on reddit has decided to push things to a completely new level. They turned to third-party software to make Windows 11 feel more familiar. And the final destination in their project was a skin inspired by Windows XP.