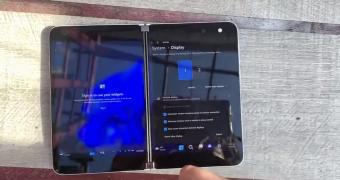 We’ve known for a while that Windows 11 can run on the Surface Duo, but up to this point, the skilled developer that made it happen has been struggling with all kinds of errors.

But as far as the graphical glitches are concerned, Windows 11 now seems to be running as smoothly as it gets on the Surface Duo, with a recent video presenting the operating system feeling at home on the device.

In many ways, Windows 11 on the Microsoft Surface Duo, a device that launches with Android out of the box, is the Windows Phone the software giant never released. We all know what happened with Windows Phone, Windows 10 Mobile, and Lumia phones, so a Surface Duo running Windows 11 is pretty much the closest we can get to the dream of having a modern Windows Phone.

A dream that’s yet to come true

At this point, however, it’s pretty clear that using a Surface Duo with Windows 11 as your main phone still isn’t possible. But the more the project advances, the more th… (read more)
Remember to like our facebook and our twitter @WindowsMode for a chance to win a free Surface Pro tablet every month!