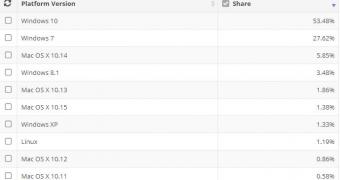 Microsoft will discontinue Windows 7 in January, and the closer we get to this milestone, the more users make the switch to Windows 10.

Statistics provided by NetMarketShare for the month of October show that Windows 7’s market share dropped substantially, most likely due to the approaching end-of-support date.

At the same time, Windows 10 improved during the same month, and this shows that the majority of Windows 7 users who decide to upgrade choose Windows 10 as their next destination.

Specifically, Windows 10 increased its market share from 52.33% in September to 54.32% in October, while Windows 7 dropped from 28.61% to 26.90%. This can only be good news for Microsoft given that Windows 7 is dropping at a rather fast pace, but the 2009 operating system is unlikely to go dark completely by the time the January 2020 deadline is reached.

The last round of updates for Windows 7 will be released on January 14, 2020.