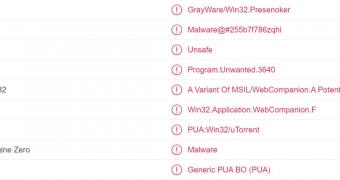 uTorrent continues to be one of the most popular BitTorrent clients out there despite the questionable changes implemented over time, but more recently, users have encountered a warning that could push them to alternative apps.

A series of antivirus apps, including Microsoft’s very own Windows Defender, flagged uTorrent as a threat, signaling what many believed it was a virus.

While specifics aren’t available right now, the warning is most likely the result of the adware bundled into uTorrent, which shouldn’t normally harm your device, but which users should still treat carefully when installing apps on their devices.

No official statement on the problem

Windows Defender labels the uTorrent threat with a “severe” rating, marking it as a “Potentially Unwanted Apps.”

Other antivirus apps that <a href="https://www.virustotal.com/gui/f… (read more)
Remember to like our facebook and our twitter @WindowsMode for a chance to win a free Surface Pro tablet every month!