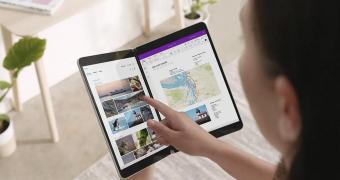 Microsoft has released the official SDK for the upcoming Surface Duo smartphone running Android, and this gives us the chance to get a taste of this new device way ahead of its late-2020 release date.

Surface Duo was announced in October 2019, and according to Microsoft, it is projected to hit the shelves in the holiday season of this year.

The SDK technically gives developers the chance to prepare their apps for the upcoming dual-screen Android experience on the Surface Duo, and Microsoft says a similar release for the Surface Neo, which runs Windows 10X, is due in February.

An SDK demo published on Twitter by Microsoft watcher Zac Bowden was used by Jonas Daehnert, also known on Twitter as PhoneDesigner, to create an early look at the Surface Duo by merging the video with the official device renders released by the Redmond-based software giant.

Surface Neo SDK next month… (read more)
Remember to like our facebook and our twitter @WindowsMode for a chance to win a free Surface Pro tablet every month!