Hello everyone, how are you all doing today? Anyone ever heard of PowerDirector 17? A premium video editing app made for Windows 10 by Cyberlink,a trusted company that has been around for many years, some of you might even have some of their software pre-installed on your laptops or PC’s as we speak, especially if you have some default camera app.

Today we will highlight an awesome video editing app known as PowerDirector 17 for Windows 10. It is a premium app that will cost you about $69.99 right now through the official Microsoft Store. What makes PowerDirector 17 special for PC users, is that it doesn’t require much from your PC in terms of performance etc, a moderate computer with basic stats, lets say 2GB ram, a 300GB Hard-drive and an Intel i series or AMD Phenom 2 and above can run this program just fine. PowerDirector 17 is suited for both beginners and professionals. It has tons of easy to add filters and options, you can seriously make some awesome music videos, family video slideshows, movies and more, let’s find out what else PD17 can do.

What Is PowerDirector 17 About?

PowerDirector 17 delivers high-end performance editing for both standard and 360º video. Built to be flexible, yet powerful, PowerDirector remains the definite video editing solution for anyone, whether they are beginners or professionals.

• Express Projects makes it quick & easy to create pro-quality videos
• Color Match analyzes & applies a color scheme across an entire clip
• Look-up Tables allow for matching footage from separate sources
• Author CDs, DVDs and Blu-rays or Share via Facebook or YouTube
• Create a unique collage with up to 7 videos with Collage Designer
• TrueTheater Color analyzes and enhances your videos’ colors
• Customizable Design Tools for Titles, Tracking and much more
• Render videos with the world’s fastest video engine: TrueVelocity
• Action Camera Center has all the tools for pro-grade action videos
• Merge clips on separate tracks for catchy effects with Video Blending
• Combine up to four camera shots into one video with Multi Cam
• Advanced Vertical Video editing tools for all your mobile shots
• The world’s first consumer level 360º Video Stabilization
• End-to-end 360º editing, now with Titles and Tracking
• Edit 360º footage into conventional videos, just like you had multiple cameras at every angle with View Designer 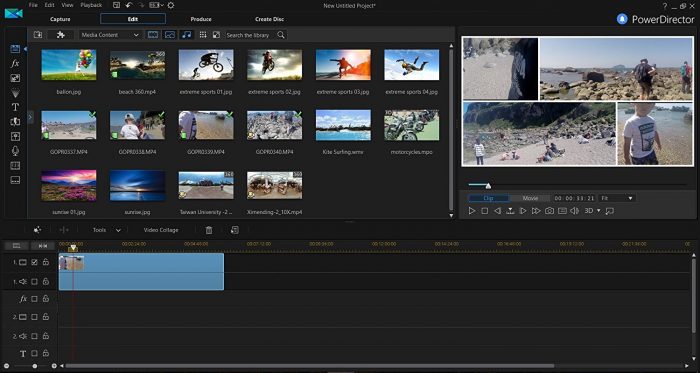